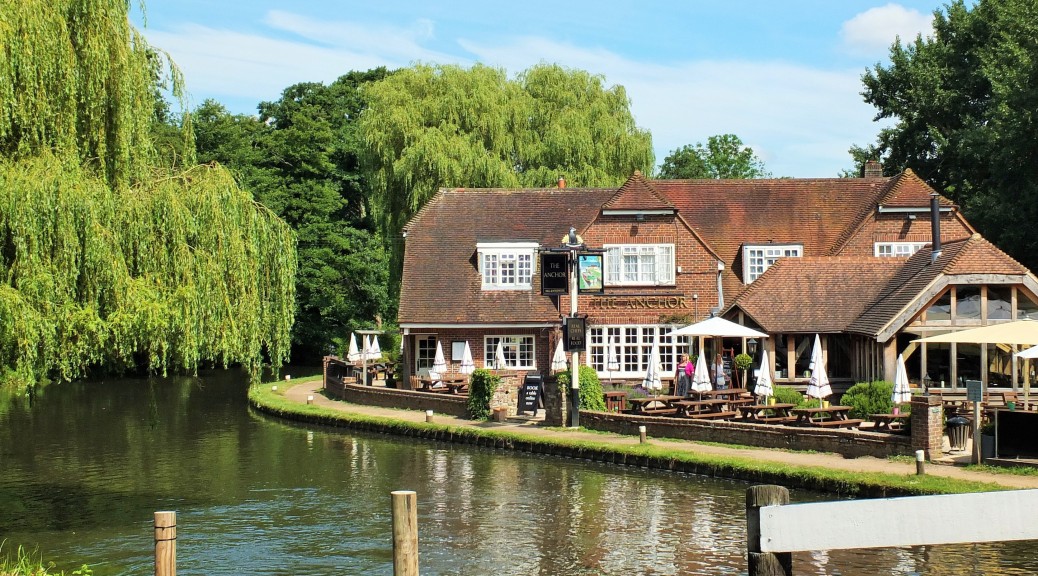 Woking Walks – Part 2: Canal Boat Chick Gets Frisky, Chris’s Organ Gets a Good Plucking……As property prices in London and south-east England continue to go through the roof this week’s article will show you a viable and very picturesque alternative –  accommodation on Surrey’s beautiful waterways (including pics of gorgeous birds). I will also explain what inspired me to get my organ out in Woking…including plucking – but with no strings attached.

So let’s start with that inspiration. Regular visitors will probably remember that some of my music has been inspired by my treks through the Surrey countryside. For example Newark Priory in the photo above inspired my ‘Rock the Priory‘ (featuring cannons!) – for the original article about this with pictures of the Priory (A.D. 1190) here’s the link. And for those who have not yet downloaded the single here it is on iTunes and the video with priory pics is on YouTube here.

Not far from Newark Priory in the village of Pyrford is a small but very impressive Norman church, St. Nicholas, dating from A.D. 1140 (more info about its interesting history in the Newark Priory Link). Queen Elizabeth I is believed to have worshipped there and is rumoured to have donated a silver chalice to the church in 1570. Inside this church is a pipe organ which inspired me to add a classical pipe organ part to my Baroque Anthem (which is on the album here). Here are some photos of the church organ and its beautiful setting (just click on any of my pictures if you want to see them in high definition):

In order for me to give live recitals I recently decided that I had to find a way of capturing the sound of a pipe organ in a more portable instrument. Ideally I wanted one I could strap round my neck so I could also pretend to be a rock guitarist. Here is where my AX shoulder synth came in. In the video below you can see me producing a new version of my Baroque Anthem using the AX to recreate a church organ sound at the beginning of the piece. Then during the recording I reset the instrument to produce a more modern keyboard sound and play some twiddly baroque type sequences.

Towards the end of the video I reset the instrument again to sound like a lead guitar which is more typical of a modern rock band. Yes I have never forgotten when I failed the audition as a guitarist with my first semi-pro band (but they did help me get my first set of key boards – 40 years ago!). So if you ever fancied sounding like a rock guitarist but don’t want to mess around with all those strings – just strap one of these things around your neck and give your organ a jolly good ‘plucking’. Here is the video:

It’s nice that my keyboard skills have reached the level that I do not need to add canon fire to the music to hide the bum notes!

Moving on swiftly… to the problems caused by over-inflation in the UK property market. Have you ever fancied living on the water, perhaps with a pub next door and surrounded by lots of pretty birds? Well if this is the life for you just come over to the River Wey Navigation System or the Basingstoke Canal and get yourself a nice little barge. In the report below I will introduce you to some of your new neighbours, as well as some rather beautiful chicks and the local refreshment facilities.

Let’s start with a picture of the Anchor Pub – my son Alex and I can verify the yumminess of their food – we enjoyed a very pleasant summer lunch there watching the boats go by. Why don’t you try their prized Steak & Ale pie (Gold Medal Winner EBLEX England’s Best Steak Pie 2015). This is their signature pie – braised British steak & velvety gravy made with their award-winning Tanglefoot beer, served with buttered mash and seasonal vegetables.

In addition to old English pubs you can also find some very old bridges as you travel along these waterways. If you have ever wondered what a 250 year old bridge looks like here is a photo:

You can actually rent the barges on the River Wey Navigation system – a modest investment to test whether you are really the sort of person who likes life afloat. Here’s is a selection of some of the offerings:

The River Wey Navigation system joins onto the Basingstoke Canal which passes through Woking town. I know this canal well because my previous UK apartment had a nice balcony overlooking the canal. The Basingstoke canal was originally built during the industrial revolution between 1789-1794 and has recently been restored to allow pleasant walks along its tow paths and of course it is possible to travel along the canal by barge.

Let me now introduce you to the accommodation solutions to help you overcome the expensive London property prices. Here is a selection of pictures of house boats – many of which are converted industrial barges – they are ‘parked’ along the canal, not far from Woking town centre (with trains to London running every few minutes – and a journey time of less than 30 minutes!).

Now, what about that frisky chick? Well as I was taking my photos of assorted water craft I felt what appeared to be something nibbling at my ankles – we do get a number of water rats around the waterways so I quickly focused my attention onto whatever it was that had taken a fancy to my tootsies. The picture below is of a gorgeous little chick who must have decided that I was its daddy.

The chick was so young it had not developed the natural instinct to flee at speed whenever people and other unpleasant animals get too close. Soon Mummy duck came along and quickly guided her little baby back into the water where she ensured there was a safe distance between her offspring and the man holding the strange black thing with knobs on it.

Actually on that day I came across a number of other birds and their families as I took my pictures on the waterways. Here is a selection:

Isn’t life strange? Many of my friends back in England, who are enduring the onset of Winter, are dreaming of escaping to warm exotic locations by the sea. Here am I, enduring the sun on the coast of the western Cape of Africa writing exotic articles about life in Woking! Variety certainly is the spice of life. I wonder what I will be writing about next week.

Have fun…and look out for those chicks around your ankles!

For new visitors to my site you may be interested in some other articles featuring Woking and the Surrey countryside. Here are a few examples:

Searching for Cannibals in Surrey

The beach where the Martian invaders landed