Sensational Images of Blazing Cape Town Mountain – Hout Bay Fires moving towards Llandudno Engulf Sandy Bay: It is not everyday that you find yourself living next to a mountain that is on fire. This happened to me yesterday in Cape Town and this report explains what happened using high definition photography to capture some stunning views as the events unfolded. Links to my other similar photographic blogs are also included.

or if you prefer to listen to my electronic music album ‘Studio Valiumm‘ here are the videos (also on iTunes using the link here):

I had hoped my earlier report about the heroic exploits of the Cape Town fire-fighting crews battling against flames around Hout Bay would be my last on that subject (see my detailed report with pics here).  Sadly I was proven wrong when explosions in the informal settlement at Imizamo Yethu in Hout Bay (known as Mandela Park) started fires that destroyed an estimated 1000 homes. Figures vary but this disaster is believed to have made around 4000 people homeless.

Between Hout Bay and my roof-top apartment in Llandudno is a rather large mountain – the Karbonkelberg. Very dry vegetation caused by the current drought conditions helped the Hout Bay fires in my previous report to reach my side (the Llandundo side) of the mountain. Fortunately when this happened over a week ago helicopter-borne fire-fighting crews quickly brought the bush fires under control. They were helped by very calm weather conditions followed by some much needed rain a couple of days later.

These fortunate climatic conditions were not in evidence at the time of the explosions this Saturday (11th March 2017). The wind helped the flames to spread rapidly and it was difficult to use helicopters because of both the wind and the risk of injuring people – including firefighters on the ground. The wind was predicted to get even stronger during the day and although the fires were brought under control the bush ignited again towards the evening.

My suspicions arose just before dawn on Sunday 12th March as I tried to take Moon-set photos of the full moon over Sunset Rocks (Llandudno). The moon was a deep red colour and this is often an indication of pollution – particularly that caused by large bush fires. As the moon set and the sun rose I could see smoke billowing over the Karbonkelberg mountain from the direction of Hout Bay. The wind was predicted to reach 100 km an hour (which you really feel on the Cape coast) and the large, well known, Cape Town Cycle Tour (formerly known as Cape Argus) had to be called off.

The winds made it impossible for the chopper crews to perform their dousing magic on the mountain bush fires and it was only a matter of time before flames started to engulf the Sandy Bay/Llandudno side of the Karbonkelberg. They continued to spread round the mountain towards the Sandy Bay beach area as the day progressed (see pictures – click on them for high definition views). 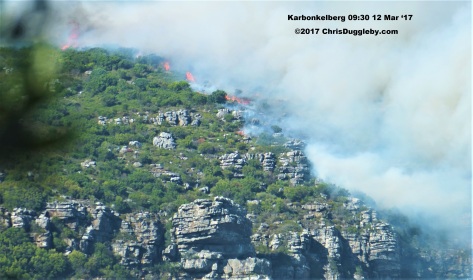 By nightfall the whole of this side of the mountain was engulfed in flames. Ours is one of the first Llandudno properties bordering the Table Mountain National Park where Karbonkelberg is situated. We needed to start preparing ourselves for a potential evacuation. If you have never seen a mountain on fire at night time the pictures here will illustrate how it can be both awe-inspiring and at the same time very frightening – especially if you live next door to it. 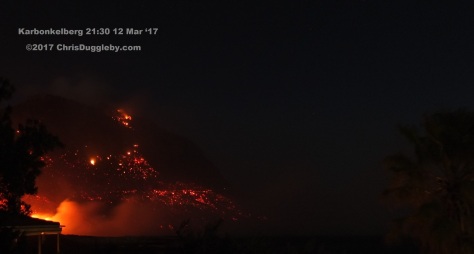 In the evening the authorities had placed road blocks at Fishermans Hook – the only road leading to our part of Llandudno (the ‘Sunset Rocks’ area). This was to prevent ‘sightseers’ from blocking the roads in case they were needed for emergency services or residents evacuating in a hurry. Fortunately we didn’t need to evacuate.

The pictures presented above were taken at 9:30 pm. I continued to monitor the flames throughout the night (my regular ‘comfort’ trips during the night provided me with useful ‘mountain viewing’ opportunities). As the night progressed the flames subsided and the spreading appeared to be limited by a fortuitous ‘natural firebreak‘. This was due to a long stretch of sand dunes that reaches from Sandy Bay beach all the way to the town of Hout Bay.

In the past bush fires with larger flames have managed to cross-over this gap but the vegetation has changed in recent years making this less likely. Earlier fires had cleared the area of much larger ‘Alien’ plants and replaced them with the smaller indigenous Fynbos shrubs that are endemic to this part of the Cape. 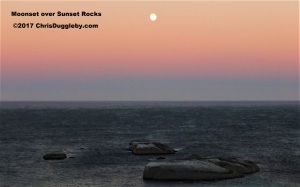 By the time the sun was just about to rise on Monday 13th March (today) I was up again trying to catch the full moon setting over the rocks in front of my apartment.

Today there was not the red colouration I had witnessed the previous morning – as the sun rose I could see the mountain had stopped burning apart from an occasional ‘pre-breakfast’ smoke. The pictures here illustrate how the fire has caused most of the green vegetation to be replaced by grey, charred remains. I understand however that these shrubs are very hardy and their evolution has been closely intertwined with bush fires – the indigenous vegetation of the area should regenerate before too long.

Fortunately on this side of the mountain no homes were destroyed – sadly this was not the case for about 1000 shacks on Hout Bay side. However I understand the authorities, acknowledging that this is a disaster area, will provide funding to ensure more secure accommodation can replace the shacks. The challenge is on for the authorities to help regenerate the homes long before nature regenerates the vegetation.

Here are some other reports I have prepared on similar themes:

29th Mar 2013: Ship wrecks (and other old wrecks) on the rocks near Sandy Bay, Cape Town