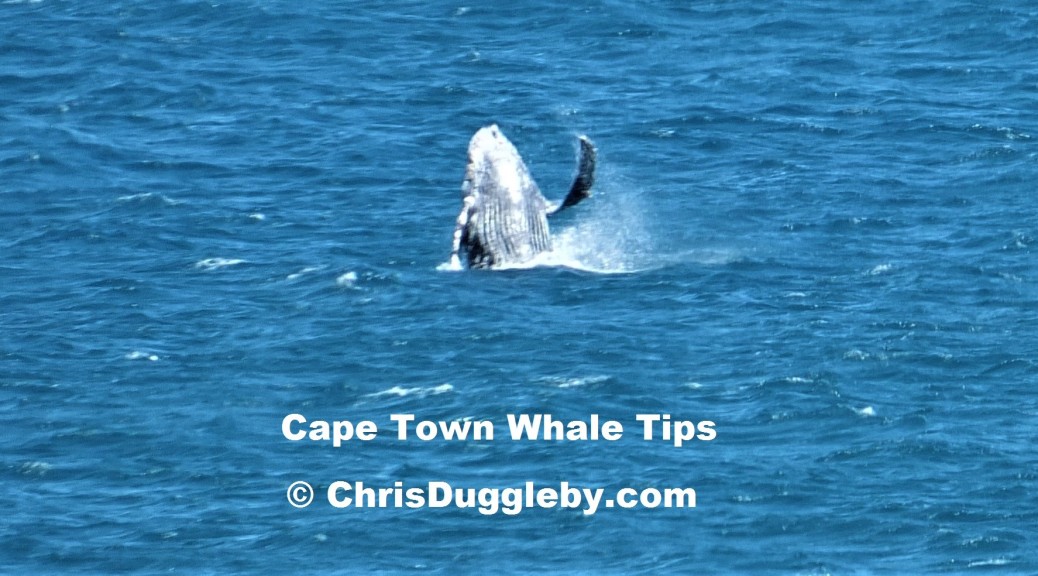 Cape Town Whale Spotting Tips – Secret Bait – Sandy Bay Beach Excitement as Big Willy Comes: Some people spend a fortune on whale spotting expeditions but struggle to capture a glimpse of one of these glorious mammals. Others sit at home sipping coffee and the whales simply ‘pop-by’ from time to time. I have been lucky enough to be in the latter category. In this article I share some of my experiences and tips about whale watching near Cape Town

I want to use this article to share with you some tips that I have found useful when trying to spot whales around the coast of Cape Town. I have been a regular visitor here for 10 years and since I got a camera with a long bit on the front 5 years ago I have managed to catch pictures of whales on a regular basis (see some evidence below).

I always come to the same place (Sunset Rocks in Llandudno, not far from Camps Bay and Cape Town). I think the whales like coming close to the shore here because we are next to the Table Mountain National Park. This means there are not lots of tall buildings to worry them – in fact Llandudno doesn’t even allow any shops or restaurants to open in the village. The following pic illustrates the remoteness of the location:

Whales are highly intelligent creatures. Just imagine what is it like to spend all your time swimming about in the sea looking for your next meal – and occasionally your next mate (more on this below). Fortunately Sandy Bay, next door to my pad, is Cape Town’s ‘almost official’ gay, nudist, beach. You can probably imagine that lots of interesting things happen on the secluded rocks facing the ocean.

Whales are very curious animals and I am sure they consider Sandy Bay to be a kind of human zoo where they can watch the chappies frolicking around on the rocks. This certainly draws them in closer to see what these strange land based mammals are up to. As the whales get closer I start to click with my rather large zoom lens.

Until about 5 years ago I did not have much luck trying to photograph whales. Then in 2012 I started eating 85% cocoa dark chocolate on the balcony during my mid-morning coffee break. From that time onward the whales started to appear and most importantly they came closer to the rocks where I live. OK this is hardly irrefutable scientific evidence that whales like the smell of chocolate but I have had sightings every year since 2012 (I was a scientist – but chocolate and whales were not my speciality – I made mutants).

Obviously the bait doesn’t always attract a whale but on the days when you are not successful you can eat the chocolate yourself. A rather pleasant consolation!

You will notice that in front of my balcony (behind the chocolate above) there are bushes. If you want to take pictures of someone going about their normal daily activities it is best not to advertise the fact. Otherwise they will either start to pose or run away. So I surreptitiously position myself behind the bushes holding the ‘magic’ in my hands and if I am lucky – Billy Willy comes (or perhaps one of his pals like Wilf).

I guess anyone can simply claim to have tips on whale spotting (just ask one of the folk offering boat tours from the Cape Town Waterfront). So let me share with you the pics I have taken since 2012 by simply staying on my balcony with a piece of chocolate (and a camera with a long bit on the front).

Try and include a frame of reference in your photos. Sea can get pretty boring (just ask a whale) and it is rather hard for viewers to understand the size of your subject if there is no reference apart from ocean. Therefore many of my photos include either the rocks or perhaps a passing ship. This helps to reinforce the magnitude of the beast you are dealing with.

As well as whales we also get large numbers of dolphins – but because they are smaller and a lot more nimble they can be rather to difficult to capture at a distance. They often accompany the whales – no doubt attracted by the same food sources (not sure about the chocolate though). Here are a couple of examples:

It is not only whales and dolphins that like to play around the rocks in front of my South African apartment. From time to time some of the local Lycra clad girls like to go onto the rocks for a quick jump (more jumping pics here). In this case I think another picture will help to explain what I mean…

Interestingly on the other side of the rocks is a sunken ship wreck – another feature of this locality. You can see more pictures of wrecks using the link here. Here are a couple of examples…

So as you can see there is a lot going on at Sunset Rocks – if you want to read about even more excitement try my article from last weekend about what the firefighters got up to with their choppers on Sandy Bay rocks – the link is here.

Time for a chocolate break!

Here are some more pics of the excellent emergency services from today’s (5th March 2017) beached whale at Sandy Bay, Llandudno, Cape Town (note – it was not Big Willy): 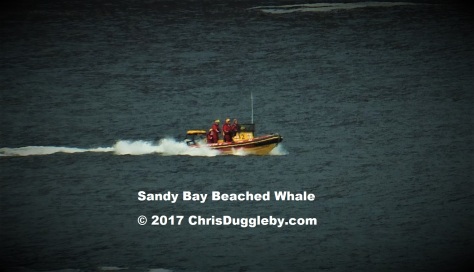 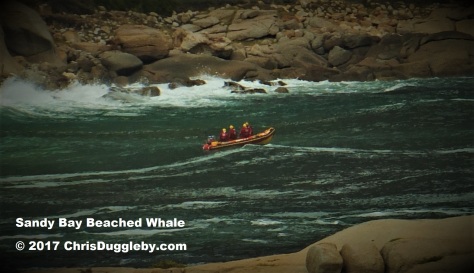 The badly injured, beached, whale at Sandy Bay was finally ‘put to rest’ at 6:30 pm with a big explosion yesterday evening. I understand it was later towed by sea to Hout Bay for land-fill disposal (there is no road to Sandy Bay). The beach certainly looked clear this morning – Pics below from approx 8:00 am (and one of another undesirable body on the beach!)… 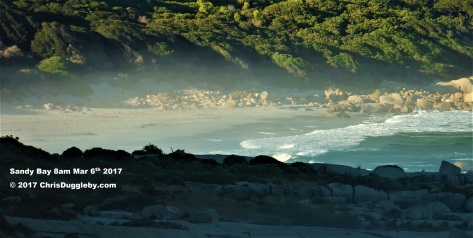