German Police Detain Rabbits, Bees ‘Whoop’ at each other and Hunt is on for Penguin Murderer: While the gutter press concerns itself with second rate articles about the US President, Brexit and North Korean assassins/nuclear rocket tests thank goodness we are getting quality news from Germany’s serious newspapers. This morning I was impressed by the dedication of German police who detained rabbits in Saarland, a scientific revelation about how bees say ‘whoops’ and how a kidnapped penguin was brutally murdered in Mannheim.

or if you prefer to listen to my electro/techno album ‘Studio Valiumm‘ here are the videos (also on iTunes using the link here):

Followers of my blog at ChrisDuggleby.com will be well aware of my crusade to convince the international community that humour is alive and thriving in the German press. Many of us ‘non-Germans’ think that our Teutonic neighbours are devoid of the any ‘silly’ genes. I lived and worked in Germany for many years and even donated my sperm to ensure the diversity of the country’s gene pool. I can confirm humour is very much alive there – you just have to know where to look for it (Oh…and being bilingual helps).

For example, take this morning’s dip into a highly respected Munich newspaper. I quickly scanned the obligatory ‘filler’ articles written to satisfy the mainstay readership of liberals and lefties. These covered subjects like which branch of medicine will get priority should the US President donate his brain to science and whether the term ‘Brexit’ could be registered in the EU as a laxative. Suddenly I was knocked out of my political apathy by a highly relevant and informative article about German Police taking rabbits into custody. 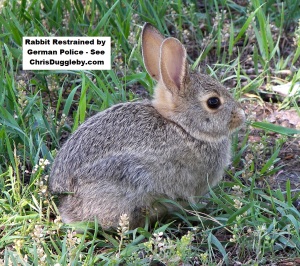 It would appear that a chap in Bexbach (in the German State of Saarland), was under investigation for causing injury and property damage. The suspect expressed concern that his 33 rabbits would not be able to cope without him should he be taken into custody. The lady judge clearly had a soft spot for bunnies and instructed the police to also make arrangements to detain the man’s rabbits. According to police reports the operation to secure the rabbits was a pretty ‘sweaty’ affair (“schweißtreibend” a term used by the force to describe their most challenging arrests). Fortunately the Rabbits have now all been apprehended and are awaiting news about their keeper – presumably their sentences will run in parallel.

Following this journalistic masterpiece I moved to the science and technology part of the paper. Here I came across an update on the latest advances in communicating with bees.

These days there is a lot of scientific research involving bees to try and understand why their numbers have been diminishing. One exciting approach involves trying to decipher the bee’s language to learn how to communicate with them. Then we can quite simply ask them ‘Hey Bee, whats up?‘. Therefore it was with great enthusiasm that the German newspaper reported a breakthrough published on Feb 8th 2017 by the online journal Plos One (link for techie geeks and non-believers here).

The scientists appear to have deciphered how bees are able to make warning ‘Whoop‘ noises (in bee language of course) to their brethren in the hive. The researchers indicated that this bee ‘Whooping’ is part of an international warning language (honey bees from both the UK and France volunteered for this research). For example if a nasty creature bites a bee’s leg when it gathers nectar it goes back to the hive and warns its pals by whooping at them. (“one study….pinched the leg of a bee at the food source to replicate an insect bite and recorded the ‘whoops’ upon its return. Interestingly, the study showed that a bee who came under attack and won the battle or came back unharmed did not whoop about the danger” source: Plos One).

I suspect the researchers will now be turning their attention to determining if there are any regional variations to the Bees’ whooping – for example do the English Bees say ‘whoops’ when they there is actually nothing wrong? Or do French bees tend to exaggerate about their experiences and have highly passionate whooping sessions with their neighbours (I am not sure whether Parisian Bees were involved in the study).

The whooping is vibrational in nature and apparently you can induce a whole colony to repeat it en masse if you simulate the warning whoop by gently vibrating a bee hive. It works best at night – imagine the trauma in the hive when thousands of the little darlings all suddenly start saying ‘whoop whoop’ to each other! By signalling danger whooping has evolved as a way of helping fellow bees to get the best nosh (‘Excuse me – but if I were you I wouldn’t go there – you might get your leg bitten‘). 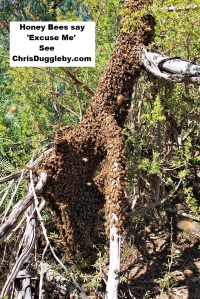 The third heart-rending story in today’s German press involved a penguin that had recently been reported as ‘kidnapped’. This Penguin was a resident at the Mannheim Zoo. On 11th February during the 3 p.m. feeding session the zoo’s staff noticed that penguin number 53 had gone missing. After a thorough search the staff were able to rule out that the penguin had simply walked off (escaped) or that it had been attacked by another animal. Their conclusion was that it must have been kidnapped!

Well today the zoo staff’s worst fears were confirmed. Not only had the penguin been kidnapped but it had also been murdered. It’s poor little body was found under a bush in a nearby car park. It is too early to say exactly how and when the penguin died but the medical experts will, of course, do a full autopsy and the police have enlisted their best detectives onto the case to help unravel what happened. At the time of going to press an act of terrorism had not been eliminated – the authorities were keeping an open mind.

As a precaution security measures for all remaining penguins in the Mannheim area have been tightened. Local penguins have been discouraged from going out unaccompanied. The murdered penguin was not known to have any political affiliations and as far as the authorities knew it had never visited North Korea.

Clearly this is a rather sad note upon which to end this week’s article but it serves to underline that we are living in difficult times. Fortunately in today’s troubled world you can rely on the German press to present the important facts as they really are – No fake news here! 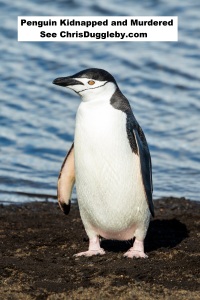 If you found this article interesting please consider taking a look at some of my other recent reports on similar subjects.

…starting with some fun related articles:

some here is some more serious stuff: