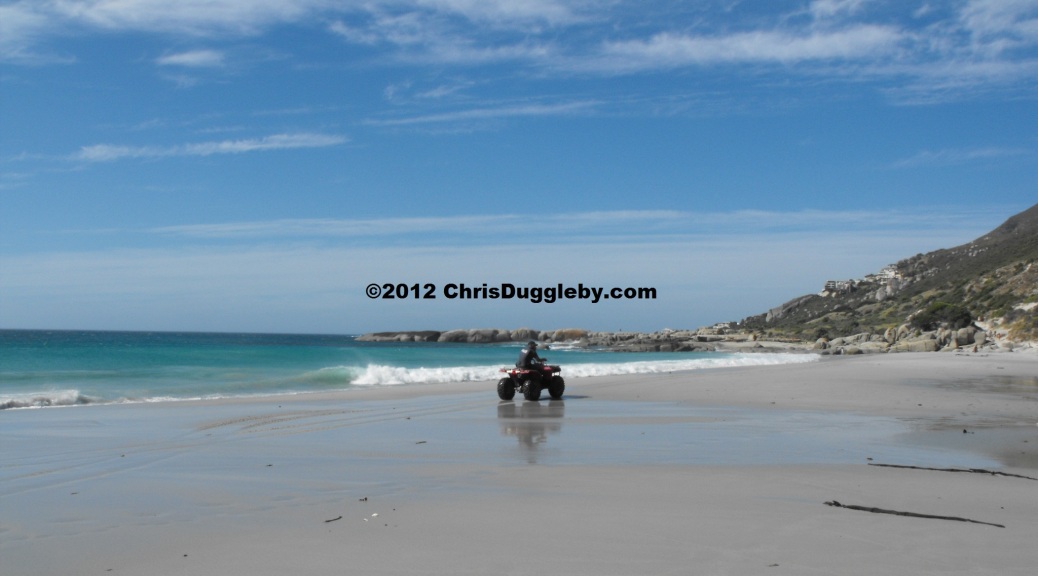 Those readers who regularly visit this blog will be aware that the next generation of Dugglebys (namely my son in Bavaria) has already been sold on the advantages of quadbikes due to their versatility and fuel efficiency. He finds the quadbike is a very practical way of getting around rock festivals where the terrain (and the weather) is not always ‘car friendly’.

So imagine how impressed I was when I discovered that in preparation for the visit of our celebrity hound RISKKO the Hout Bay Police department had sent in reinforcements to ensure that Sandy Bay Beach was cleared of any undesirables (in particular paparazzi with telescopic lenses trying to catch pictures of RISKKO skinny dipping with the birds on the beach).

Sandy Bay is the closest beach to the African hide-away which I use to escape the European winter. It is less than 15 minutes walk from my front door. However because it is part of the Table Mountain National Park it is not very easy to access or patrol using the normal 4 wheel police vehicles. Therefore the local police from the nearest town, Hout Bay, come over on their quadbikes and do the job in style, with the minimum impact on the environment. This allows them to also patrol the pathways leading from Hout Bay to the beach.

Despite its remote (and therefore wonderful) location Sandy Bay also receives careful attention from the authorities in other respects. I was particularly impressed to see the amount of attention given to educating sun worshippers about the harmful effects of over exposure to the sun. They actually encourage people to wear extra clothing on the way to and from the beach (to minimise the potential damage by harmful UV radiation).

The photograph below shows the location of Sandy Bay in relation to Sunset Rocks which is where my roof-top retreat is situated. There are two ways to get from Sunset Rocks to Sandy Bay. One follows the official path (and if you visit please note the requirement to be suitably attired – we don’t want to risk any over exposure!).

The second way (and the way RISKKO and I prefer because it take a little longer and provides us with some excellent exercise) involves going (and in some cases climbing) over the rocks. The Photograph below shows these rocks which also provide an alternative bathing location for people who do not necessarily wish to get sand into every crook and crevice.

There are actually two main beaches making up the area people refer to as Sandy Bay beach. The one in the picture below is the smaller of the two and has a lot of interesting rock formations and rock pools to explore (more on these adventures in a later blog article).

The next picture shows this smaller beach from the opposite side which gives a better view of the rock pools. Notice there is only one set of human footprints on the beach – mine!

Moving on from the smaller beach (either via a path along the grass to the left or if the tide is out you can walk along the sand and rocks from one beach to the next) the first thing you will notice as you enter the larger beach is the fantastic view of the Karbunkel Mountain (named because it looks from the other, Hout Bay side, like a carbuncle).

If you go to the end of this larger beach and look back (in my case from a vantage point on some of the rocks) you can see the mountain views providing the backdrop to the other side or the beach. These are the little lions head mountain (the pointed one) and the back-end of the 12 Apostles mountain (which were featured in my last blog on Llandudno which can be found here).

Here is another view of the Karbunkel Mountain showing off some of the flora and the fascinating rock formations in the sea.

The photograph below is of the little lions head with an even smaller dogs head in the foreground. There is a bigger Lions Head mountain nearer to the centre of Cape Town which is also pointed. You will be able to see this in the photograph at the end of this blog.

The next three photographs illustrate some of the colourful natural flora that grows naturally in this area. These just happen to be the ones that were in bloom on this African spring day.

If you like wild flowers Cape Town and its natural parks are well worth a visit. In some of my later blogs I will be presenting some of the beautiful flowers I found in other parts of the region.

Finally my ‘exercise’ trip took me along the last part of the official path leading to the car park at Sunset rocks. On the left hand side just before you get to the car parking area there was a beautiful array of orange,yellow and purple flowers which I captured in the following photographs.

Have I managed to wet your appetite for a visit yet? So far I have only been able to present a fraction of the beauty which exists in this region. We have beauty at the micro level with the flowers and small animals and at the macro level with the mountains and sea views (and of course the Whales – more on that later). If you like what you see please visit the site again.