The subject of this week’s blog article is somewhat less dated than the English prehistoric burial mounds I described last week. My normal mountain trekking route on the edge of the Alps takes me past a place known as Thalhäusl. This is just above the alpine spa village of Bad Feilnbach. Here on the edge of the forest at the foot of the Schwarzenberg mountain is a lovely little chapel called the Marienkapelle.

On one of my ‘mountaineering’ expeditions I happened to notice the door of the forest chapel was open so I decided to pop my head inside. I was amazed at the way this very small chapel was so beautifully decorated. The first thing I saw as I looked through the door was the altar. This was laid out with fresh flowers and behind the altar was a beautiful hand painted mural of the Virgin and Child

I walked up to the altar and admired the rear of the chapel. On the walls on each side of the chapel door were colourful pictures and on the left hand side there was some information about the history of the building. It was originally founded in 1830 when it was dedicated as a place of ‘perpetual help’. Most recently it was renovated in 1981 and again consecrated on 31st May 1984. 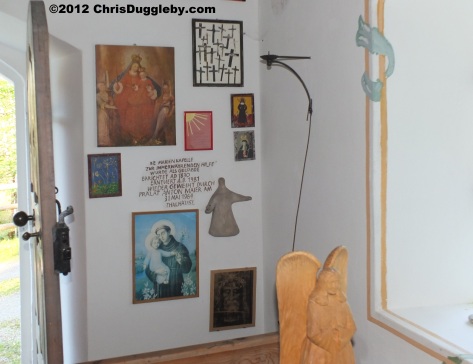 Above the door were some more small pictures, hanging together with religious and agricultural artefacts. There was also a rope to the bell which sat in the tower above the small chapel.

What surprised me the most were the beautiful murals on the ceilings to the left and the right of the door. On the left side facing the door was a wall painting of a lady in a traditional Bavarian dress (a ‘Dirndl’) and hat. She appears to be singing. On the right side ceiling was a picture of a man dressed in Lederhosen carrying a traditional local hat with a feather in it.

If you visit any of the local churches on a Sunday or during an important religious festival you will see many people dressed in these traditional clothes (collectively referred to as ‘Trachten’ or ‘Trachtenmode’). Sometimes there are processions in which hundreds of local folk dress in traditional clothes accompanied by marching bands. I have tried to capture some of these in the pictures below (sorry about the angle of the shot – I was leaning out of the kitchen window!). The location is Bad Feilnbach near the Bavarian, Austrian border.

By the way, if any of my regular visitors are concerned that I have not mentioned RISKKO the dog in this week’s article this is because he now has his own Dog Blog. In the last few days I have added some more pictures and stories about his latest adventures (and of course his videos!).